This weekend and next week, Indian Country shines with matrilineal masterpieces, Auntie art, the return of Reservation dogsand a delicious day of Choctaw culture.

The Native News Online Events Guide is here to set the scene.

Never miss the biggest stories and breaking news from Indian Country. Sign up to receive our reports straight to your inbox every weekday morning. 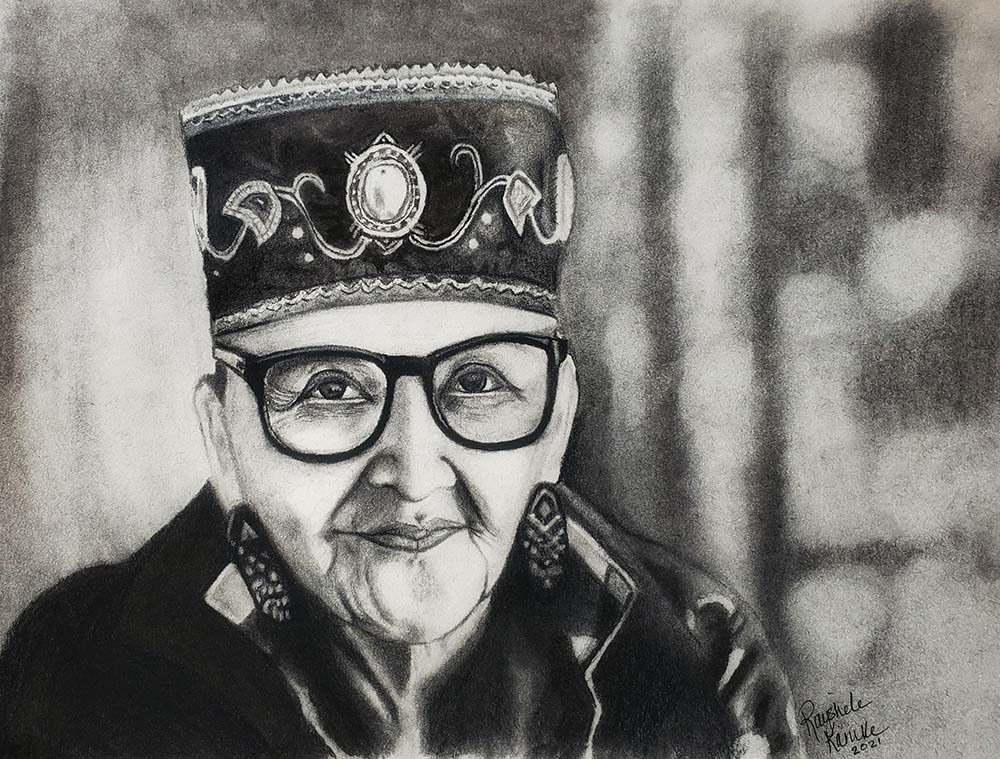 This portrait of beloved Anishinaabe elder Mary Lyons by Anishinaabe artist Rayshele Kamke is part of the exhibition Noojimo (She Heals), on view through September 17 at All My Relations Arts in Minneapolis. (Nedahness Rose Greene)

When she was 12, one of the Nedahness Rose Greene aunts took the preteen under her wing and behind the wheel.

“An aunt of mine actually taught me to drive,” Greene (Anishinaabe) told Native News Online. “We live on the Leech Lake reserve so there are long dirt roads and there were a lot of stops and starts with braking. It was pretty scary at first, but after a while we sat back and laughed, and I did pretty well.

This sweet aunt memory is referenced in Greene’s photo “Your Auntie is Cool.” The sleek portrait, with a vintage car in the background, does not include Greene’s driver’s aunt, but shines the spotlight on generous and respected Anishinaabe educator and versatile aunt LuAnn Robinson.

The image is featured in the aunt-centric exhibition Noojimo (She Heals), curated by Hillary Kempenich (Turtle Mountain Band of Chippewa), an award-winning multidisciplinary artist, culture carrier and activist.

Being on the show is poignant for Greene, who said most of her dear aunts are no longer living. Creating pieces for the show allowed her to reconnect and remember.

“I wanted to portray my view of my aunts,” Greene said. “My aunts were always shrewd and beautiful and elegant and classy. They were like my second mothers.

For Greene, a highly sought-after photographer and activist, it’s time for aunts to be creatively celebrated and commemorated

“A lot of our Aboriginal kids don’t have anyone to look up to, and a lot of our role models are aunts,” Greene said. “Aunties heal because they inspire and nurture us and don’t judge us. They accept you for who you are without scolding you.

Greene’s sister, Rayshele Kampke, also works on the show. Its warm and inviting black and white drawing of Mary Lyons, beloved Anishinaabe elder, author and all the “great-grandmother” aunts, is adapted from a photo taken by Greene.

For Kampke, Lyons embodies the spirit of the supportive and wise aunt.

“I learned so much from her by reading her books. She is super knowledgeable and she shares traditional methods and wisdom with other people. Kampke told Native News Online. “Everyone feels like she’s her aunt or her grandmother and a lot of people look up to her in different ways.” 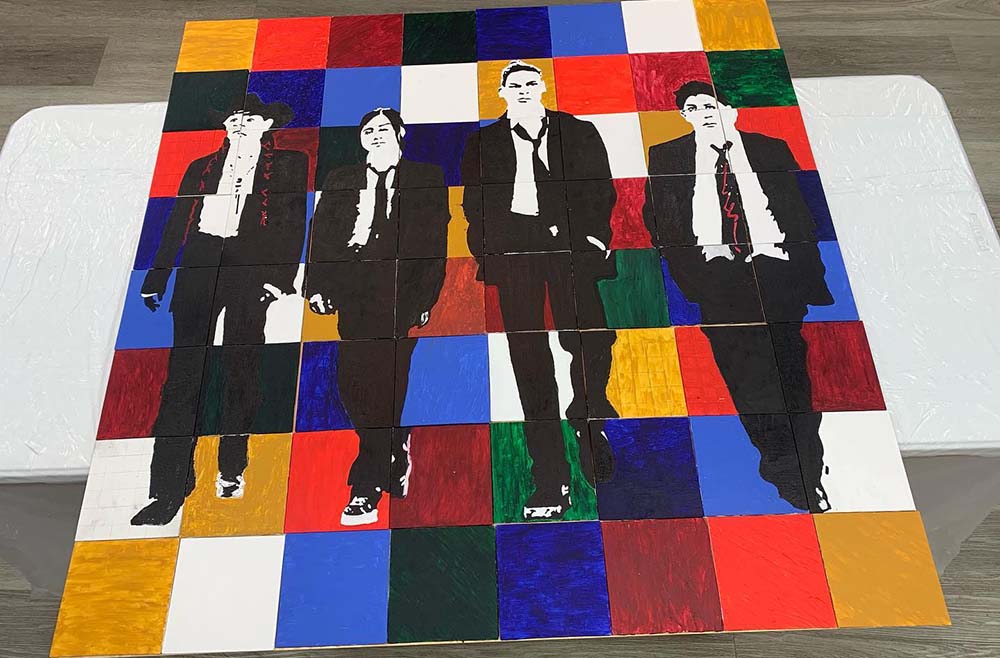 A tile painting of reservation dogs by Muscogee artist Joe Hopkins and members of the Muscogee community. The art will be featured at a premiere of the show’s second season at the River Spirit Casino Resort in Tulsa, OK on Friday, July 29. (Joe Hopkins)

Hopkins’ design captures the dogs all dressed up in their iconic Quentin Tarantino-inspired formation against a backdrop of funky multicolored squares.

“The Reservoir Dogs kind of scene is what she emulates,” Hopkins said. It’s just an image that I thought was really cool.

A mystery guest at the art-making event also thought the piece was irresistibly awesome. And when the guest approached Hopkins, he presented a chance offer.

“One of the executives from the show showed up and was just hanging out in the background and watching the room as it was coming together. And he said ‘You know, what the hell? what should we do with that?” Hopkins told Native News Online. “So that’s going to be shown at the premiere. It felt like it was meant to be.

Hopkins said he hoped some of the writers and cast members who were set to appear at the premiere signed him on.

This meeting of the art and the sensation of the small screen is all the more significant as the Reservation Dogs, who live on a reservation in the fictional countryside of Okearn, Oklahoma are obviously Muscogee even though it is never specifically stated on the show.

The proud pop cultural connection between the show and the creators adds power to the collaborative community piece.

“I thought the project would be really good for the community because it’s a piece that they can not only say they’re a part of, but they can really take ownership of it because of the purpose of the show,” said Hopkins. “So it sort of has a double meaning there.”

Celebration of the first anniversary of the Choctaw Cultural Center 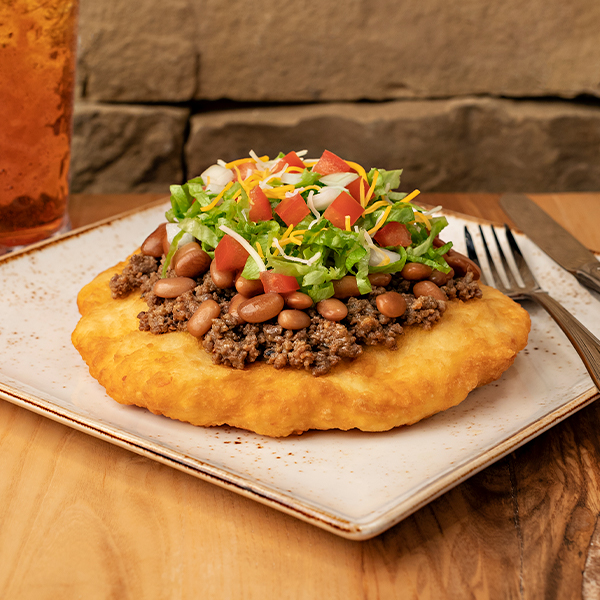 There will be plenty of banaha bread baking at the Choctaw Cultural Center’s first anniversary celebration.

Matrilineal: Legacy of our mothers 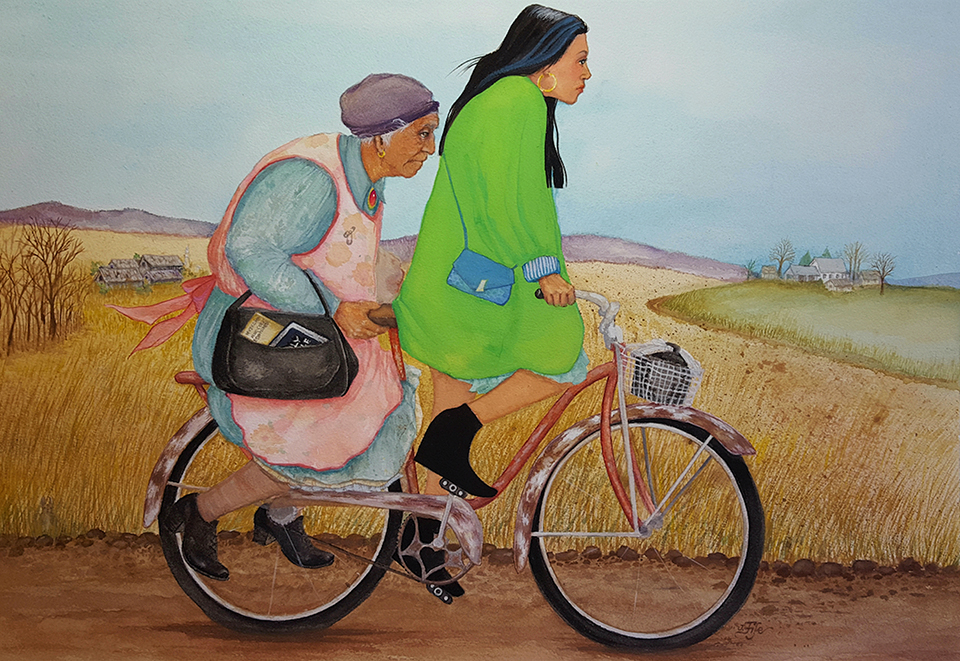 Take Me To Church by Mvskoke artist Jimmie C. Fife is part of the exhibit Matrilineal: Legacies of Our Mothers Friday, running Friday, July 29 through January 15, 2023 at the IAIA Museum of Contemporary Native Art in Santa Fe, NM . (IAIA)

Shell carving, painting and sculptural textile work are just a few of the arts practiced by the educated, accomplished and versatile Muscogee mothers and daughters of the Fife family.

Although the Fifes are Muscogee from Oklahoma, they have strong ties to the Southwest, where their work is exhibited and celebrated.

Do you enjoy an Indigenous perspective on the news?

For the past decade and more, we’ve covered important Indigenous stories that are often overlooked by other media. From the protests at Standing Rock and the toppling of colonizer statues during the racial equity protests, to the ongoing epidemic of Murdered and Missing Indigenous Women (MMIW) and delinquent accounts related to assimilation, cultural genocide and at Indian Residential Schools, we were there to provide an Indigenous perspective and elevate Indigenous voices.

Our short stories are free to read for everyone, but they are not free to produce. That’s why we’re asking you to donate this month to support our efforts. Any contribution – large or small – helps us to remain a force for change in Indian Country and to continue to tell the stories that are so often ignored, erased or neglected. Most often, our donors make a one-time donation of $20 or more, while many choose to make a recurring monthly donation of $5 or $10. Whatever you can do helps fund our Indigenous-led newsroom and our ability to cover Indigenous news.

Author: Tamara IkenbergE-mail: This email address is protected from spam. You need JavaScript enabled to view it.
Tamara Ikenberg is a writer for Native News Online. It covers the tribes of the southwest as well as native arts, culture and entertainment. She can be reached at [email protected]
Share. Twitter Facebook Pinterest LinkedIn Tumblr Email