The LLLinked project leverages Metalcraft’s HF RFID tags, attached to the squares of a growing artwork, so owners can confirm authenticity and potentially connect to an app to strengthen friendships.

Jul 28, 2022Technology helps authenticate art in an overall artist project Anna Clark, which connects the disassembled pieces of a growing work of art, as well as those who own the pieces. The project combines art with social welfare and community, and it leverages HF RFID and QR-code tags from Metallurgy to uniquely identify each part. Years of preparation Linked to LL The artistic project aims to create links and reduce the isolation caused by social media. At the center of this project, Clark’s work consists of a single continuous ink drawing, divided into gridded pieces.

Social media has helped shape the way people interact, Clark says, but it hasn’t all been good. “I don’t think it makes us more social,” she says. It makes us antisocial.” More time interacting digitally, Clark maintains, as many spend less time in physical human interactions. She examined ways in which art could reverse this process and bring people together across geographies, as well as in time, those who own works of his art will establish new relationships, not only now but also far into the future.

Clark has set an event date for her 100th birthday, which will be decades away, on May 18, 2077. She hopes the owners of her works will attend the event to celebrate their relationships and build friendships that will continue into the future generations. The role of RFID in this project is authentication. Each of Clark’s printed works comes with a Metalcraft Near Field Communication (NFC) tag that transmits data via 13.56 MHz (ISO 15693 compliant) to NFC-enabled smartphones. In the future, she expects HF RFID tags to record every ink drawing and create a property profile.

Each sheet is numbered and connected to additional sheets which carry the design as it moves clockwise around the first sheet.

Create a puzzle to bring people together

Art is in Clark’s DNA, she says. She started doodling and drawing as a child and discovered that a single piece of paper was not enough to contain her creativity. While pursuing a graduate program at the University of Iowa, she found herself frustrated by the breakage caused by the edge of the paper. This led her to the idea of ​​adding pieces of paper, cutting her ever-expanding design into squares, and creating an artwork puzzle, of sorts, that could be put together after being pulled apart. .

Initially, Clark draws his work on 24 x 18 inch sheets of paper, each of which is then cut into a grid of a dozen 6 x 6 inch squares. Each sheet is numbered and connected to additional sheets which carry the design as it moves clockwise around the first sheet. Each square is also uniquely labeled. It then prints a limited number of parts. Clark, who is doing the project only in the free time she has from her graphic design work, has drawn 25 sheets so far. The artist has created prints of sheet number one, and these personally signed and uniquely labeled prints are for sale.

Buyers can purchase the art prints directly from the LLLinked website for $100 each. Once they receive their print, they have a choice: just enjoy the art for fun and display it on a wall, or visit the website to create an owner profile. Those who opt for the latter can provide as much information as they feel comfortable with and then connect with other art owners also participating in the project.

To use the RFID tag, buyers would turn on their phone’s NFC feature and tap it near the tag on the back, allowing them to see the ID number confirming that the artwork they have purchased is genuine. The same process could be accomplished with the QR code. 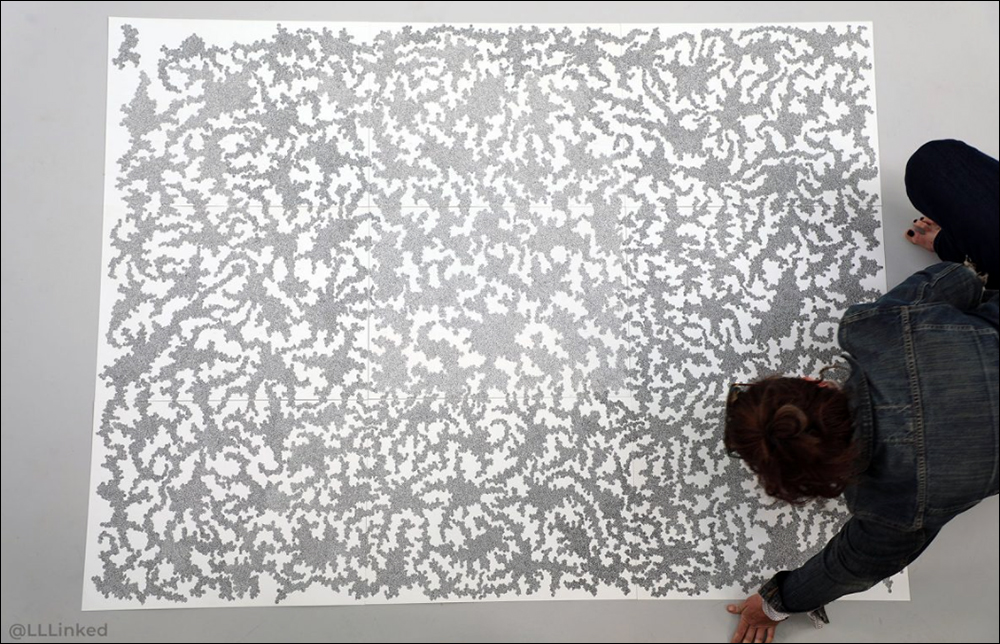 Clark, who is doing the project only in the free time she has from her graphic design work, has drawn 25 sheets so far.

Metalcraft worked with Clark to identify a label that could be attached to the specialty archival paper on which she prints her work that would resist yellowing or aging so the art could last for decades, if not centuries. Metalcraft provided the artist with a Avery Dennison Smartrac Circus SLiX2 HF inlay printed with matching QR code and LLLinked logo. The tag is attached to the back of the artwork using an acid-free archival adhesive, according to Colynn Black, RFID business development manager for Metalcraft. The unique identification number encoded on this tag would be linked to the serial number of the print.

Metalcraft customized a label that would suit the aesthetic of the artwork and would not exceed a size of 2 square inches. The company customized the adhesive so that it could withstand the aging process without being abrasive to the artwork. Regarding the longevity of RFID as a technology, Black speculates that RFID has many decades of active use ahead of it. “The unique thing about RFID is that it’s been around for years,” he says, despite public perception that it’s a new technology, as it dates back to World War II. worldwide, when used to identify aircraft. 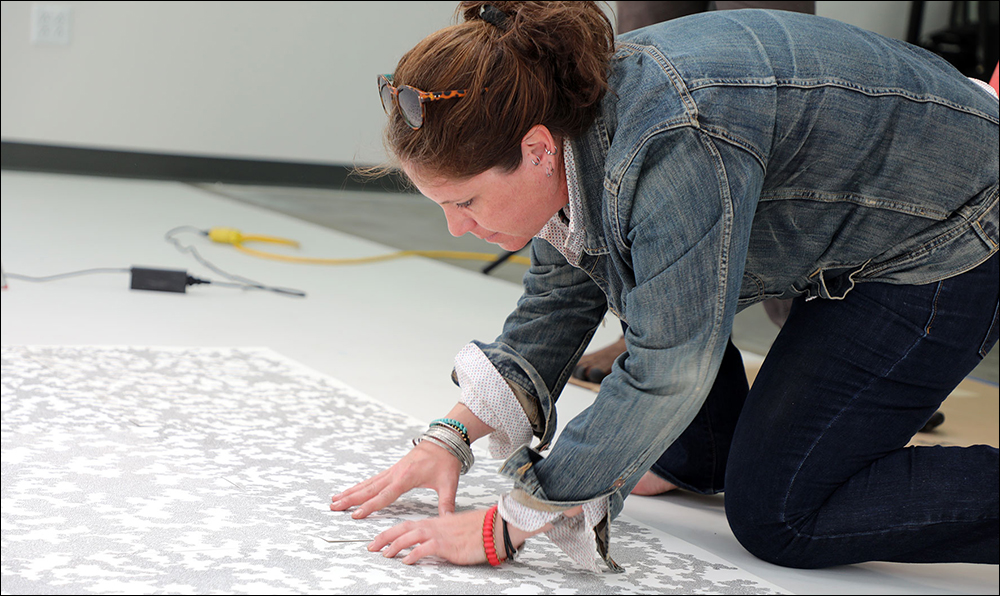 This puzzle-like work is what Clark calls handmade social media.

Although authentication is the first use case, RFID tags could be used in the future to connect users directly to the registration site where they can enter their profile information, which would then be linked to their work. of art. Moreover, it could provide users with visual content. “One thing that I thought about when we were doing this project,” Black recalls, “is that it could technically be linked to a private page that a user could go to to see an image of this work of special art.”

So far, most buyers have been people Clark knows personally. “What’s interesting,” she says, “is that a lot of people who own these places don’t know each other, so it’s up to them whether they want to email and say, ‘Hey, what’s up?'” The system could do more to help guide in-person social interactions, she adds, using smartphones as a tool. For example, those who opted for a system on a dedicated app could be automatically detected via Bluetooth or geolocation if they were near another participating art owner. “These are thoughts that are still far in the future, which may or may not be done.”

Clark patents the project’s process for creating and disassembling a work of art in progress, then uniquely identifying the resulting pieces. This puzzle-like work is “handmade social media,” she explains. “The goal is not to see the complete piece of art assembled -[it] is simply to be a catalyst for social interaction and to see what is created when people come together. A message printed on the back of each square invites the owner to visit Iowa City on the date of the 2077 event and then again every ten years thereafter. For those who would like to start meeting new people now, she plans to create events that could take place earlier.

For Metalcraft, the project and the customization it requires offer an opportunity for innovation that is dear to the company, whether it concerns several hundred or millions of tags. “We pride ourselves on being a technology innovator and helping solve problems,” Black says, “and it’s not always about the volume or the dollar amount behind it. It’s projects like that [which] allow technologies to progress. We really liked making the resort simple.”

If the project attracts attention, Clark says, more members will join the art ownership community. “I can’t know how big this thing will be,” she says, because it will depend on how long she can continue to develop her work. “If I live to my golden years and am able to continue drawing, it will be quite large and the numbers will reach tens or even hundreds of thousands,” she says. “There are these unknown unknown factors, and the fact that they can’t be controlled, which are kind of magical.”