When Alex Hall, the creator behind Thirteen Leather, was in high school, he got his hands on a bundle of leather scraps and created some leather rings. This bundle of leather became Hall’s discovery of his creative outlet. Originally from the Indian Lake area near Lima, Hall attended Bowling Green University to study fine art. In 2010 he
was hired at RP Marketing/Transcend Strategy Group as Design Manager. “Fortunately, I love what I do,” Hall said. “It’s like working without working.” 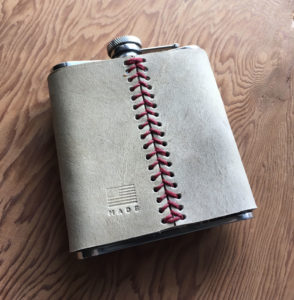 Leather renewed
But after seeing an old photo of that leather ring he made in high school, he realized he had an artistic curiosity that was satisfied by working with leather. About 9 years ago, Hall collected old buttons and used them to make more leather rings, with a bit more craftsmanship and detail. An outdoorsman, Hall uses axes for chopping wood and realized how well a handmade leather sheath would fit his axes. Hall found a local source that sold leather and began to learn about the nuances of the material, including the tanning process and thickness. “My outdoor camping side was inspired to make knife and ax holsters,” Hall said. “And I kept buying more leather to create a variety of things.”

After posting a few of his projects on social media, Hall’s talents began to gain recognition. “It really took off with people wanting me to create personal gifts for family and friends,” Hall said. Today, Hall’s leather work has expanded to include wallets, bags, belts,
jewelry and more. He still enjoys his full-time job in graphic design, but says working with leather is a good creative release. 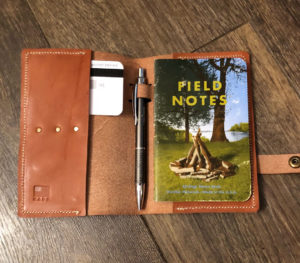 Personal pieces
Every piece of work made by Hall is personalized and bespoke. “People bring me projects and they’re not able to translate what they want the way I can,” he said. “If I can make it happen, that’s really cool.”

One particularly memorable piece was requested by a friend who wanted to pass on his old baseball glove to his children, but the glove was too worn for everyday use. Hall made the glove into things that can be kept, used and passed on. “I cut the glove into pieces and got the most out of all the leather,” he said. “I made wallets and earrings that my friend could give to his kids. He was thrilled.

One of his favorite aspects of working with leather is what his pieces mean to his clientele. Last Christmas, a woman came to Hall with an ax that had belonged to her husband’s father. Hall engraved the initials (which husband and father share) in the
wooden handle.

“She said it brought tears to her husband’s eyes on Christmas morning,” Hall said. “It’s really great to hear that, because my work takes a lot of time and I want it to make sense.”

Looking for leather? Hall takes custom requests and loves talking to people about leatherworking ideas. Contact him at www.athirteen.com or via Instagram, @untreizecuir.