About 1,800 years ago, an ancient curse was recorded in red paint in a burial tomb near what is now Haifa, Israel. It was written by Yaakov (Jacob) “the proselyte”, an ancient Greek who converted to Judaism. Yaakov was buried in Beit She’arim, an ancient Jewish town with a necropolis buried beneath its streets – but what does his curse promise?

A warning to grave robbers

The necropolis, located 100 km northwest of Tel Aviv, includes a series of catacombs dating from the 2nd to 4th centuries AD. Beit She’arim’s burial sites detail its diverse history, with artwork and inscriptions by ancient Greek, Aramaic, and Hebrew artists.

Yaakov “the proselyte”, a term for someone who converted to Judaism, had written the curse in Greek, in red paint, on the wall near his grave to deter grave robbers. The warning bed“Jacob the Proselyte swears to curse anyone who opens this tomb, so that no one will open it. He was 60 years old.

An 1,800-year-old tombstone for ‘Jacob the Convert’ accidentally fell in Beit She’arim https://t.co/3VysKzPJ2E

Researchers from Tel Aviv University believe that family members probably wrote the final script of the curse and that the discovery dates back to the late Roman period or early Byzantine period (390-400 AD). JC). They also suspect that he was either a Christian or a member of the cults of Mithras or Isis.

Surprisingly, Yaakov’s appeal to grave robbers is just as relevant today as it was at the time of his death. In 2012, the Israel time reported that members of the Israel Antiquities Authority had come across grave robbers searching for artifacts in the tunnels of Beit She’arim. 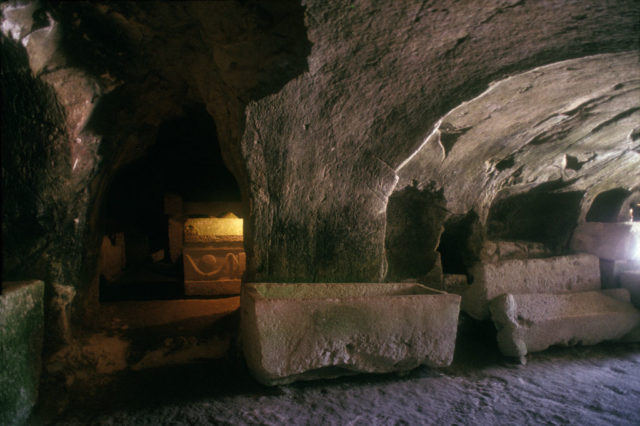 Today, Beit She’arim is protected as Unesco World Heritage. Since excavations of the necropolis began in the 1930s, archaeologists have uncovered well-preserved paintings and inscriptions in Hebrew and Greek. The site also housed a jewish villageequipped with underground aqueducts, a synagogue, ritual baths and even an olive press.

The site has preserved some of the last glimpses of ancient Jewish life in Israel, before Christianity became mainstream. Thousands of visitors flock each year to explore the stunning architecture and eerie messages from beyond the grave.